Look for this link on your favorites:

Houston TX Battery Replacement Near You

Battery replacement service near you in Houston, TX, has never been simpler. The factory trained technicians at Team Gillman Mazda are waiting to assist you no matter the make or model of your vehicle. Schedule an appointment online or in person today.

Benefits Of Having a Vehicle Battery Replacement

A vehicle’s battery has a vital role in its driving performance, and it’s important drivers keep up with the status of the battery. While car batteries are anticipated to endure about 3 years on average, replacing it might be favorable not only for drivers but for the vehicle. Also, maneuvering with a weakening battery could also impact the performance of other vehicle parts.

Because vehicle batteries play a vital role in how a vehicle can perform on the road, a battery replacement could be important for refreshing a vehicle. As time goes on, the current vehicle battery deals with wear and tear from many different elements like driving conditions, tough weather elements, and electrical usage. But, replacing the battery with a newer one minimizes those elements and how they would be affecting the vehicle. This means even more power can be provided to the vehicle’s engine, the alternator will have even less work to do with the car’s battery, and your car will perform similarly to how it should. Plus, a battery replacement could help detect more issues in the car like if there may be any electrical problems or interior lights flickering often, a battery replacement will likely help put an end to these issues.

Life Of Car Is Expanded

Because the vehicle battery plays such an important position in a car’s longevity, it’s very essential to always keep an eye on its upkeep with regular checkups on its status. Replace your vehicle’s battery, especially if it’s not performing per usual or has been more than three years. Not only will yearly inspections help with vehicle performance but increases the lifespan of the vehicle by averting problems in the future. A new vehicle battery keeps other parts performing at high levels for longer ranges of time, and a chance to drive for longer. It’s not just the alternator and engine that might see the enhanced performance. Anything that calls on electrical power to work needs power from the car battery may see some degraded performance. ​An old battery could impact anything from the radio or music, any electronic gear shifters, or the vehicle’s lighting. 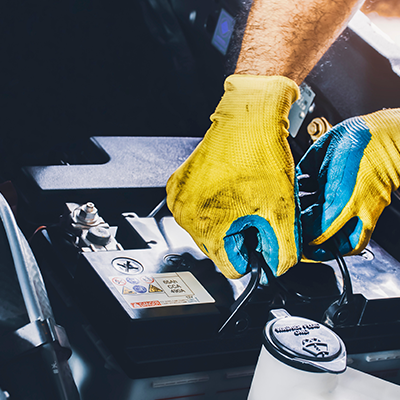 Team Gillman Mazda is proud to handle all your Mazda repair needs. Our expert mechanics are standing by to serve you. Schedule your next Houston, TX, battery replacement in person or online today. Drive a little. Save a lot. That’s the Team Gillman Advantage.

Look for this Save icon

Look for this Save icon